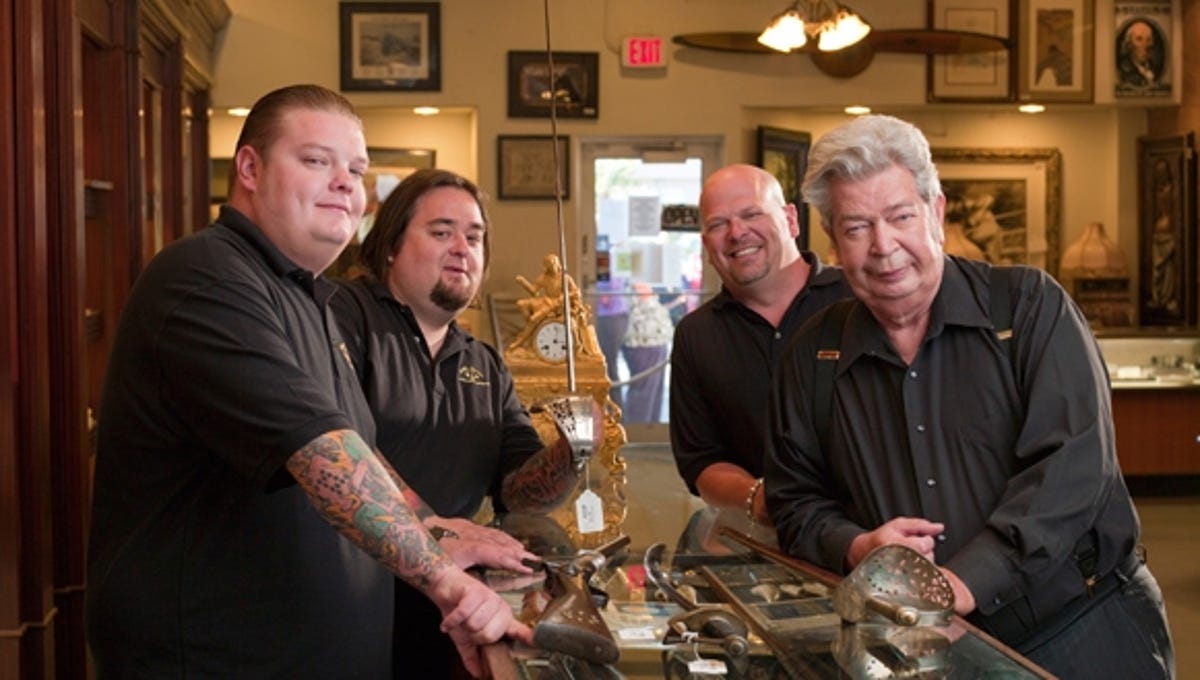 Pawn Stars is a History Channel reality show based around the patrons of Vegas’ family-run pawnshop, the World Famous Gold & Silver Pawn Shop. The series premiered on July 19, 2009, with the most recent season, season 16, premiering on January 21, 2019. Production on the 17th season is set to resume imminently after having halted due to the COVID-mandated lockdowns.

Pawn Stars is consistently one of the biggest ratings-draw for History Channel, routinely bringing in over 3 million viewers. As such, the main cast members are among the highest-paid reality stars.

We look at the main cast members of Pawn Stars and break down their net worth and salary.

About the Pawn Stars Cast

World Famous Gold & Silver Pawn Shop is a Las Vegas, Nevada-based pawn shop that has been the Harrison family heirloom for three generations. The store first opened its doors in 1989 after Richard Benjamin Harrison and his son Rick Harrison established the store at 1501 Las Vegas Boulevard.

The pawn store specialized in antique jewelry with a high market and return value. They were reportedly making $700,000 annually in profits.

When Rick Harrison’s son, Corey, came of age, he joined the family business along with his childhood friend Austin Russell.

Richard Harrison Sr. passed away in June 2018, succumbing to Parkinson’s disease. After his death, the remaining members picked up the slack.

Currently, the pawn store houses thousands of antique pieces and employs over 30 employees. Furthermore, the store is open 24 hours a day and caters to over 3000 customers daily.

History Channel’s Pawn Stars revolves around the store and the family members that run the store. A major selling point of Pawn Stars is the family dynamic and the ensuing drama that brewed between the Harrison men. Find out the richest among the Pawn Stars, revealing their net worth.

The late Richard Benjamin Harrison was worth $8 million at the time of his death. He was the patriarchal figure of the Harrison family who started World Famous Gold & Silver Pawn Shop in 1989 with his son, Richard Jr.

Known adoringly as “The Old Man,” Richard served in the U.S. Navy for 20 years before retiring as a petty officer first class. Subsequently, he packed up his belongings and moved to Las Vegas, and opened a pawn shop that would be the subject of the History Channel reality show Pawn Stars.

Until his death on June 25, 2018, Richard rarely, if ever, took a day off from the shop. Therefore, it is unsurprising that he was worth as much as he was.

After his father’s death, Rick Harrison is now the sole owner of the World Famous Gold & Silver Pawn Shop. During this writing, Rick reportedly has a net worth of $9 million.

Harrison was admittedly making $2,000 a week before he was out of high school. His eye for valuable articles earned him the nickname “The Spotter.” Rick’s wealth primarily comes from his family’s pawn shop. Not only does the store deal in antiquities worth hundreds of thousands, but the store and its patrons are the focal points of History Channel’s Pawn Stars.

Harrison put his 8,845-square-foot Las Vegas country villa up for sale in 2019 with an asking price of nearly $4 million. He is yet to reel in any buyers.

Corey Harrison is a third-generation pawn star, taking after his father and late grandfather. He manages the day-to-day operations of the World Famous Gold & Silver Pawn Shop and is one of the central characters on History Channel’s Pawn Stars.

As of July 2021, Corey has a net worth of $4 million. His wealth comes entirely from his duties at the pawnshop and as a reality TV star. Corey was known to butt heads with his father and grandfather over the store’s dealings and philosophy. Furthermore, he also owns a minority stake in the pawnshop that amounts to around five percent.

Austin Russell, AKA Chumlee, is best friends with Corey Harrison, which led to him getting a job at World Famous Gold & Silver Pawn Shop. As such, Chumlee has a net worth of $5 million as of July 2021. Furthermore, he reportedly makes around $25,000 per episode for his appearance on History Channel’s Pawn Stars.

Russell began working for the Harrisons when he was 21. Serving as the comic fodder and funnyman on Pawn Stars, Russell is a fan-favorite for his outlandish ideas and behavior.

Outside of his on-screen antics, Russell works behind the counter at the Harrisons’ pawn shop.

Besides that, Austin is a car enthusiast with an enviable collection adorning his garage, including his beloved Maserati. In addition to that, Austin also owns a Cadillac Escalade, a 1964 Impala SS, a Rolls-Royce Phantom, a 1986 Buick Regal, and a Range Rover.